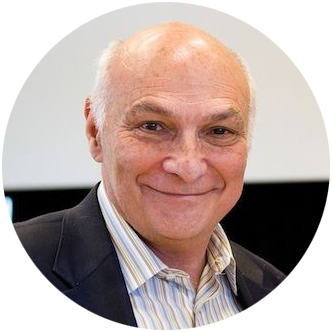 Day after day, our East team has the honor to work with a variety of nonprofits whose work shapes communities all along the Eastern Seaboard. Each of these organizations holds a rich history and a strong significance for its stakeholders, whether through the care it provides, the wild lands it preserves, or the students it educates.

Last year, our client Shakespeare Theatre Company (STC) announced that its Artistic Director Michael Kahn would retire following its 2019 season. Michael joined the Theatre for its first production in 1986, and his retirement will cap off three decades of transformative leadership with the renowned Washington, DC institution.

To learn more about his legacy, we spoke with Michael about the Theatre’s accomplishments, his first days with the institution, and what the future holds.

A young company, STC faced an uncertain fate when Michael joined its ranks. The institution looked to his robust directorial experience to help establish the Theatre, and Michael set his sights high from the beginning. He worked to create the proper atmosphere for a preeminent classical theater, ensuring that all the necessary resources were in place.

However, Michael’s vision encompassed more than the inner workings of each production. “Once I was there, it was very important that the Theatre not only do really good work with the type of material it was devoted to but that it also would become a significant part of the community,” he explained.

Building support outside the Theatre’s walls

To foster strong ties throughout the Washington, DC region, the Theatre sought to define itself across three primary focuses: its work on the stage, its work in the community, and its work in the schools. STC began offering free Shakespeare every summer and made representation a priority, ensuring that the cast on stage reflected the diversity of the audiences in Washington. 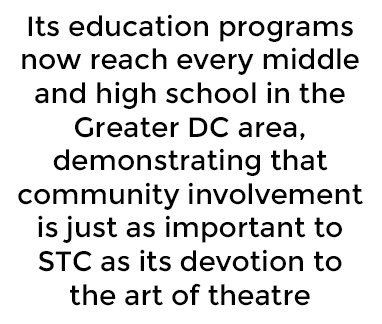 Its education programs now reach every middle and high school in the Greater DC area, demonstrating that community involvement is just as important to STC as its devotion to the art of theatre. As interest increased, STC outgrew its original theatre, moving to a larger space—and then an even larger one.

Michael credits STC’s broad base of supporters for the Theatre’s lengthy list of accomplishments. “I’m very grateful we’ve had donors who have been with us for the entire 30 years that I’ve been here,” he remarked. From these longtime individual donors, to the city’s significant investment, to people who discover their love for theatre each year, STC is a product of the community’s financial and emotional support.

Looking to the next act

30 years ago, there were only four theatres in Washington, DC. Today, there are more than 60 companies producing theatre in the city. Shakespeare Theater Company has played an instrumental role in creating this vibrant culture where so many theatres can thrive, reaching thousands of people.

In contemplating the future, Michael is looking forward to the appointment of a new Artistic Director. He awaits the energy and fresh approach they will bring to the Theatre’s classic work—and he knows they will become an important part of the STC community, all across Greater Washington, DC.